Oviedo - Covadonga: the significance of our pilgrimage's route

We have prepared this brief informative text for all people joining our pilgrimage, and to encourage those who are still undecided to register, which will help the choice of the route to be better understood. Its deep spiritual, historical significance, and its importance in our homeland and beyond. We think that it will be useful for pilgrims to know the context in which this pilgrimage takes place and we trust that it will help them, God willing, to obtain more spiritual results from it.

Oviedo, the capital of Asturias, plays a major role in the history of the pilgrimages of European Christians. The Way of St. James to Compostela is widely known about nowadays, especially after its revitalisation and diffusion in the last century, to where thousands of pilgrims go to venerate the remains of the Apostle, but not so much is known about the importance of Oviedo and its San Salvador cathedral, the Sancta Ovetensis, which was the destination of pilgrimages for Catholics even before Santiago. Nor the fact that the first pilgrimage to Compostela, the one made by the King of Asturias Alfonso II “The Chaste” in the early ninth century upon learning of the discovery of the tomb of St. James the Greater, and who ordered the construction of the first chapel in his honour to guard his remains, started from Oviedo, capital of the Asturian kingdom.

The historical importance of Oviedo as a pilgrimage centre is testified by the King of León and Castile, Alfonso X “The Wise” (1221-1284), who in his Partidas defines pilgrims as “those who go on pilgrimage to Santiago or to San Salvador de Oviedo...”. A famous medieval phrase also warned of the centrality of the Sancta Ovetensis, dedicated to Our Lord and Saviour Jesus Christ, stating that “he who goes to Santiago, and not to the Saviour, visits the footman and forgets the Lord“.

But what was it that attracted the attention of so many Catholic pilgrims to Oviedo as a fundamental destination for their spiritual experience? The answer lies in the Arca Santa, which is perhaps the most important reliquary in Christianity due to the number and importance of the relics it contains, the best known of which is the Holy Shroud that wrapped the face of Our Lord Jesus Christ when He was taken down from the cross and which wiped away the sweat and blood that flowed from Him, according to the Gospels.

Oviedo became a sanctuary-city when the chest full of relics from Jerusalem arrived there, fleeing the advance of the Muslim invasion, it travelled to North Africa and crossed the Strait of Gibraltar to enter the Iberian Peninsula. Saint Isidore, bishop of Seville (556-636), received it, transferring it to Toledo. Due to the advance of the Mohammedan troops, it finally reached Oviedo, on a small hill near the place where the Episcopal civitas would later be founded, and which would therefore receive the name of Monsacro, which it still preserves today.

In the 9th century King Alfonso “The Chaste” had it moved to the chapel of San Miguel, next to the recently founded church of San Salvador, later Oviedo’s cathedral. In the 11th century, the Catalan bishop Ponce de Tabernoles tried to open the Arca Santa for the first time, which proved impossible due to the strange phenomena of lights and noises that occurred when he tried to do so. It was in the last third of the same century when King Alfonso VI, great protector of pilgrimages, together with his wife Inés and his sisters Urraca and Elvira, got the Arca Santa to reveal its sacred secret, covering it with the magnificent silver panels, with which we know it today, as a sign of gratitude and reverence.

Once the inventory of the relics contained in the chest was made, this inventory was disseminated throughout the Christian world. There is a manuscript from the end of the 11th century, preserved in the library of the French town of Valenciennes, which contains this inventory, which gives us an idea of the international importance of the Arca Santa had from the beginning, beyond the frontiers of the Hispanic kingdoms.

The relics of Sancta Ovetensis

As we have already said, the best known of the relics is the Holy Shroud, which is exhibited three times a year so it can be venerated by the faithful, but what is unknown to many of the faithful is the number and importance of the rest of the relics contained in the Arca Santa.

Among them are those related to Our Lord Jesus Christ, such as fragments of the cross, the tunic that the Roman soldiers drew lots for, the Holy Shroud, the swaddling clothes from the manger, the cradle, the crown of thorns (8 thorns), the stone of the Holy Sepulchre, bread from the Last Supper, a piece of the reed that was placed as a sceptre in His hands during the mockery, the loaves from the multiplication, the earth he trod before the Ascension and the earth he trod at the resurrection of Lazarus, a piece of roasted fish and a piece of honeycomb that Jesus Christ ate with his disciples after he appeared resurrected, one of the hydrias of the wedding at Cana, one of the thirty denarii…

Also related to the Blessed Virgin: her clothes, milk from her breasts, hair and the chasuble that the Virgin Mary gave to St. Ildefonso.

And also relics from the Old Testament: Bones of prophets, bones of Hananiah, Azariah and Mishael, from Elijah’s mantle, a piece of the stone where Moses sat when he fasted on Mount Sinai and God gave him the Tablets of the Law, manna that rained down to feed the Israelites during their desert journey between Egypt and Israel, and a piece of Moses’ rod.

From the Apostles: Pieces of vestments or cloaks of St. Andrew, St. John, St. Paul, St. James; relics of St. Bartholomew, St. Thomas, etc. and a sandal of St. Peter, together with a fragment of the chain from his prison when he was imprisoned by Herod Agrippa.

From St. John the Baptist: A piece of his cloak, hair and bones.

From people close to Our Lord Jesus Christ (4 relics): Hair of St. Mary Magdalene, St. Stephen and soil from the tomb of Lazarus.

This non-exhaustive description serves to give us an idea of why so many thousands of pilgrims over the centuries have come to Oviedo to pray, and also why we at Nuestra Señora de la Cristiandad (Our Lady of Christianity) have chosen the capital of the Principality and its cathedral as the starting point for our pilgrimage.

The Arca Santa and its relics are kept in the Holy Chamber of Oviedo Cathedral, which can be visited if you go there before the day the pilgrimage begins or at the end of it, and which also conserves the Cross of the Angels and the Victory Cross. The former, according to tradition, was carved in the palace of King Alfonso II by some foreign pilgrims who, welcomed by the Asturian monarch, offered to do the work, which was undertaken in a single night and then mysteriously disappeared from the room in which they had been locked up to carry out the work. It is the one that appears in the heraldry of the city of Oviedo. The second is a gold cross that contains the wooden cross that King Pelayo hoisted in the battle of Covadonga, fought in the year 718 or 722, in which the Asturian troops defeated the Muslims. This warlike action is dated as the beginning of the Reconquest, which would end up reunifying the territories of the Iberian Peninsula that had been taken from Christ by the Mohammedans under the sign of the Cross.

And it is precisely there, to Covadonga, where we make our pilgrimage from Oviedo.

COVADONGA, THE VIRGIN'S FAVOUR TO SPAIN

Our destination is in the middle of the Asturian mountains, where the Sanctuary of Covadonga is located. This is a great centre of Marian pilgrimage and a place, as we have said, where King Don Pelayo and his men took refuge during the battle that is dated by different sources to the year 718 or 722, fought against the Arabs who had invaded the Peninsula. The Reconquest began from that moment, an enterprise that would last eight centuries until Granada was finally taken in 1492 by the Catholic Monarchs, Isabella and Ferdinand.

The most outstanding place in the sanctuary is the Holy Cave, where there is a chapel with the image of the Virgin of Covadonga, affectionately known by the Asturians as La Santina, and Pelayo’s tomb, the first Asturian monarch, whose remains have rested there since they were transferred in the time of Alfonso X “the Wise”, in the 13th century, from the nearby church of Santa Eulalia de Abamia, where he was originally buried.

The Christian chronicles narrate how the miraculous intervention of the Blessed Virgin was decisive in the victory, repelling the attacks that the Mohammedan troops launched against the cave. On the other hand, the Muslim chronicles explain that the forces of Don Pelayo took refuge there and fed themselves during the siege with the honey that the bees left in the cracks of the rock.

The chapel inside is in neo-Romanesque style, built in the early forties and the altar’s antipendium shows a representation of the battle of Covadonga.

The name Covadonga comes from the Latin expression Cova Dominica (meaning Cave of the Lady), which would evolve over time to its current configuration.

Next to the cave stands the Basilica, also in neo-Romanesque style, which was built between 1877 and 1901, and the complex also contains a collegiate church, hostel, pilgrims’ inn, an exercise house and a dining room.

As so many generations before us have done, we go to Covadonga to place ourselves at the feet of the Blessed Virgin to ask her to look after Spain and for the restoration of Christianity, so that, God willing, all human realities, even temporal ones, may be ordered in Christ our Lord. 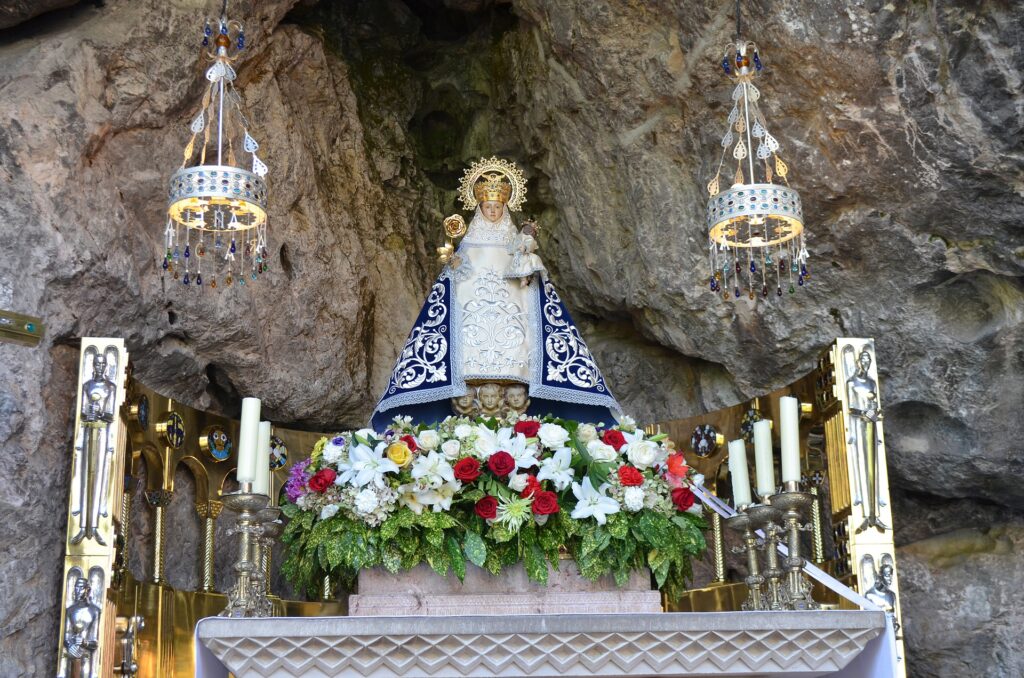